Film industry is more dependent than ever on video game technology

Film industry is more dependent than ever on video game technology

The technology used in video games is changing the way films are made in Hollywood.
Published by MarK, on Wed, 22 Jul 2020 04:24:30 -0300 [Full].
This is the opinion of Kim Libreri, an award-winning professional specializing in visual effects who has worked in several famous films, such as Artificial Intelligence and Planet of the Apes: War.

For nine years, Libreri worked with Unreal Engine, a technology well known for its use in computer games, in particular the famous Fortnite.

This technology, owned by Epic Games, offers the components and tools that a computer game developer needs, but also increasingly captivates film and television producers.

Its latest version, Unreal Engine 5, will be available in 2021 and will allow visual artists like Libreri to place graphics and images directly into a scene without much difficulty.

"In traditional film production, a director and a cinematographer can shoot a scene on the set and later deliver these scenes and creative direction to a team of virtual reality artists and designers, who enhance this material with visual effects and computer generated images during a separate production step, "says Libreri, who is currently chief technology officer at Epic Games.

But with the use of the Unreal Engine, collaboration between the director, the director of photography, the production designer and the virtual reality teams can be done simultaneously as an interactive process on the set.

"Unreal Engine 5 promises to further improve the artistic process, making it easier for virtual worlds developed for films and television to be captured and executed with the same game engine in real time", explains Libreri.

Anthony Hunt is the executive director of Cinesite, a multinational digital entertainment group, whose work with visual effects includes blockbusters such as Avengers: Ultimatum, Independence Day: Resurgence, Iron Man 3 and others.

The company recently used the Unreal Engine for a live show at a theme park, which includes scenes of chase, punching and death-defying jumps.

"Everything happens in front of you, with live artists, interactive accessories and a huge LED screen, which makes it impossible to determine where the live action ends and where the screen starts," says Hunt.

Extras and virtual crowds
The film industry has long borrowed the technology from the video game industry.

Production processes, such as mapping scenes in 3D using photographs, storyboards and animations, use systems similar to those developed to create games.

But the challenges of film and television production under the restrictions imposed by the coronavirus pandemic are likely to accelerate the use of gaming technology. 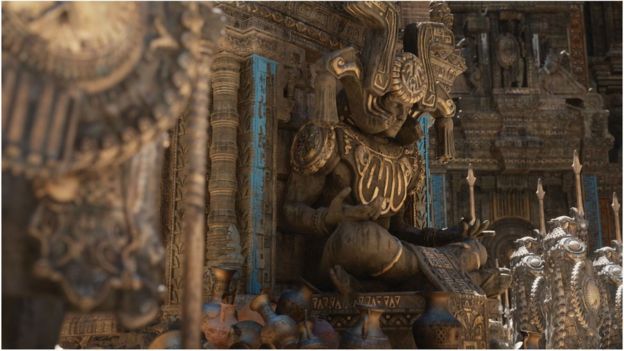 For example, video game engines are particularly good at generating scenes in which large crowds appear.

"An extra has to be fed, dressed and housed in a movie set. Now we can replicate large scenes of crowds with computer technology and have only our main actors in the foreground," says Hunt.

A good example of this is found in Rocketman, the musical about the first phase of Elton John's career.

There is a scene that shows the Los Angeles Dodgers stadium completely packed, but, in fact, actor Taron Egerton performed at Shepperton Studios in England. The crowds that appear are 3D graphics designed to be part of a larger scene.

Computer-generated decorations can be combined with giant LED walls, formed by the union of numerous individual screens. 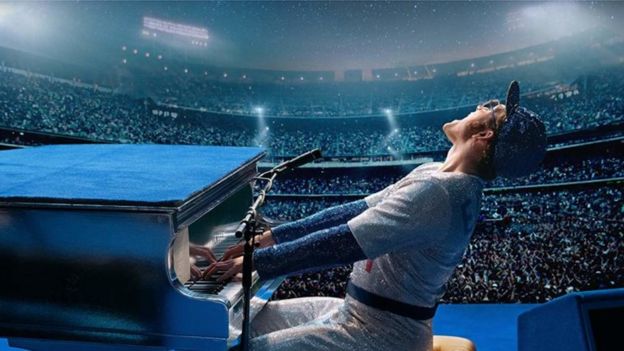 "LED walls are becoming more popular in film and television production because they allow filmmakers to capture visual effects on the camera and manipulate digital objects in a scene in real time," says Libreri.

"The LED panels like the ones we see in Disney's The Mandalorian (a science fiction television series that is part of the Star Wars family), will be of great use for the productions on the set, once restrictions begin to increase , as filmmakers can reduce travel by creating photorealistic digital backgrounds to mimic any location," he continues.
Source: Www
Tags:#Movies#Games#Technology#Computer#PlayStation 4#PlayStation 5#XBox One#Xbox Series X#
MarK (mark)
I like several different works, but with a tendency for strange and funny stories.
I like arts, games, drawings and interesting things.
Site Administrator
Leave your comment to let us know what you think of the publication
Don't forget to follow us on Facebook, Twitter or Instagram and in our curator of Steam.
MadInfinite on FacebookMadInfinite on TwitterMadInfinite on InstagramCuradoria do MadInfinite no SteamParticipe do nosso Discord
Subscribe to our channel
MadInfinite on Youtube
Latest publications
Fortnite to be completely removed from MacOS on September 23Genshin Impact surpassed the mark of 3.5 million pre-registered players worldwideApple prevents the injunction imposed by Epic Games to force the company to put Fornite back on iOSBONES Studio reveals ‘SK8 The Infinity’, their new animeFirst game of the Phantasy Star franchise for smartphones and tablets is released globallyDevelopers say it's easy to work on PlayStation 5
Content Tags
#Dragon Quest#Top 10#Teatro#Half-Life#iOS#Naruto#Doom#Kickstarter#Berserk#News#Streaming#Microsoft Flight Simulator#PlayStation Now#Eroges#Light Novel